Maybe the most famous town of Castelli Romani, famous for the elegance of its noble villas and for the delightful food and wine products

Situated along the slopes of the Mount Tuscolo, Frascati is one of the most important towns of the Castelli Romani. It is known as the City of Wine and is an ideal place to spend a relaxing day, yet at the same time it is an important European cultural centre for the number of scientific research institutes located here (ENEA, CNR, ESA, INFN). In 1856, owing to its relevant strategic position, it was the first town of the Castelli Romani to have the advantage of a railway service.

At weekends, the streets are crowded with visitors from various parts that come to enjoy the popular local wine and food and the cheerful greetings of local people. Frascati is also famous for its Villas of Tusculum, lavish patrician residents of late renaissance and baroque style which the noble Romans had built on the green fields of Colli Albani, one of such is the elegant example of Villa Aldobrandini that welcomes visitors from its commanding panoramic position at the entrance of Frascati.

Built initially as country homes by the noble Romans and used mainly for summer holidays, the Villas of Tusculum soon became a status symbol for noblemen and members of the Papacy. Many resources and much energy were spent on improving and embellishing them, engaging several artists and architects of high esteem, especially during the 16th and 17th centuries, to transform the villas into splendid stately Roman palaces and hence the definition of Castelli Romani.

Several Villas of Tusculum feature elegant surrounding gardens giving them the natural appearance of a meeting or meditation place, as used to be in the Roman Villas of the imperial period. Nowadays, the Ville Tuscolane are mostly in good condition from a structural point of view in spite of the damages caused by the Second World War. More than half of the twelve existing Villas of Tusculum come under the town of Frascati, the ones remaining belong to Monte Porzio Catone and Grottaferrata. Some of them can be visited and are included in the guided tours proposed annually by the Parco Regionale dei Castelli Romani. In recent years, they have been used for the Festival of the Villas of Tusculum.

Historical evidence of an existing small urban settlement in the area goes back to the year 850 AD when the Liber Pontificalis mentioned donations from Benedetto III and Leone IV to the churches of San Vincenzo, Santa Maria and San Sebastiano in Frascata. In 1191, after the destruction of Tusculum, people took refuge in this small centre and gained importance …

Sant’Antonio Abate – (Patron Saint of Animals) it is celebrated on 17th January with a procession leading to Piazza San Pietro (St. Peter’s square) where the animals are blessed. Festa dei Santi Patroni Filippo e Giacomo (Patron Saint’s Day) – it is celebrated on 3rd May during High Mass when candles are offered to the Saints. Entrance to the Aldobrandini stables is …

Watch the videos and photos

High quality traditional dishes, reinterpretations of the most famous dishes of Roman cuisine. Discover them Restaurants in Frascati 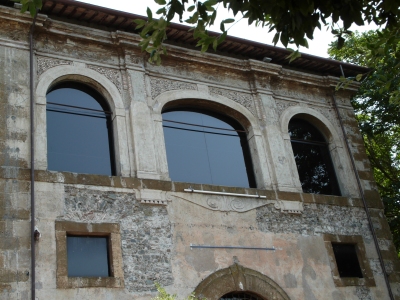