The town of the Infiorata and the noble Sforza-Cesarini family who, at the end of the 17th century changed the urban appearance of Genzano

Set along the outer slope of the crater of Nemi, Genzano overlooks the plane surrounded by soft hills facing south, which slope down towards Lanuvio. Today, well known for the important Infiorata (folkloristic and religious exhibition), one of the most spectacular local festivals in the Lazio region, in the 17th century was known as the City of Wine, par excellence is the suggestive column decorated with grape and vine bas-reliefs towering over Piazza Tommaso Frasconi in the town centre.

History tells us that the Romans knew Genzano as Cynthianum, a stopover along the Appian Way towards Velletri and Terracina, but most of all as the gateway to Nemi and its sanctuary dedicated to Diana. In medieval times, the town actually developed around the ancient rock, which was later transformed into the majestic Palazzo Sforza Cesarini. Genzano’s actual town planning was commissioned by this noble family on the original layout of two tridents: the “elm” trident (so-called “delle olmate”) has beautiful and large boulevards while the “built” trident, starting at the central square of Piazza IV Novembre, links Via Italo Belardi, Via Bruno Buozzi and Via Garibaldi

In 1153, Pope Anastasius IV gave the territory to the trappist monks of the Abbazia di Sant’ Anastasio alle Acque Salvie who built the castle in 1255, around which a residential area slowly grew. For more than a century, the monks held the much contested control of the territory until 1378, when Genzano witnessed a turbulent history of ownerships and …

Infiorata It is in this town, since two centuries, every sunday following the corpus domini day, that the Infiorata feast takes place with proud of the inhabitants who utilize flowers from the local luxuriant cultivations for decorating with flowers the streets. The climb to the cathedral is completely covered with flower panels perfectly reproducing, in a surprising artistical way, the …

High quality traditional dishes, reinterpretations of the most famous dishes of Roman cuisine. Discover them Restaurants in Genzano di Roma 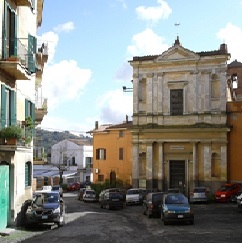