It is also known as Villa Belvedere, and is one of the most important historical villas of Frascati. Firstly, for its high privileged position from where you can have a complete view of the town, and secondly for the carefully studied designs of its splendid interiors and exteriors.

The villa was built by Cardinal Pietro Aldobrandini between 1598 and 1602 on the land received from his uncle Pope Clementine VIII, a reward for having brought Ferrara once again into the estates of the church. The building was first used as a stately home and after the death of the Cardinal it was handed over to his niece Olimpia Aldobrandini; in 1683 it was purchased by Giovanni Battista Pamphili; in 1760 it became property of the Borghese until around the year 1837 when it was once again handed over to the Aldobrandini who are still the present owners.

The residence designed by Giacomo Della Porta was arranged over four floors, divided into staterooms and others were used as service rooms. Carlo Maderno and Giovanni Fontana, together with the collaboration of Orazio Olivieri of Tivoli created the Water Theatre, the terraces and the complex water work system installed in the gardens. The ornaments and decorations represent the greatness of the Cardinal shown by the Latin inscriptions along the façade frame, or by the Pillars of Hercules in the Nymphaeum (a work of Jacques Sarrazin between 1620 and 1621), which hints at the strength of the figure in overcoming difficulties, enforced by the representation of Atlas bearing the world on his shoulders in the central niche.
The chapel next to the nymphaeum dedicated to S. Sebastiano and carried out by Domenichino and Domenico Cresti, better known as Passignano, no longer exist.

On the right of the nymphaeum there is the Sala of Parnaso, with frescoes by Domenichino and Passignano and the splendid water organ created by Giovanni Guglielmi, Giovanni Anguilla and Jacques Sarrazin.
Inside, on the piano nobile we emphasize the outstanding wall paintings of biblical representations by Cavalier d’Arpino; in the central hall you can see the magnificent monumental fireplace and the bronze bust of the Cardinal, work by Taddeo Landini, which appears among the wall decorations by the painter Annesio de Barba from Massa Carrara illustrating the greatness of the dynasty, the Officina di Vulcano (The Forge of Vulcan) and the Parnaso (Parnassus).
Precious decorations and splendid frescoes cover ceilings and walls of the other floors reaching as far as the chapel on the third floor, which is completely decorated with golden stucco in 17th century style.

The villa is private property of the Aldobrandini family and the inside is closed to the public but the gardens can be seen in the morning on weekdays by contacting The Tourist Information & Welcome office Frascati Point in Piazza Marconi, 1 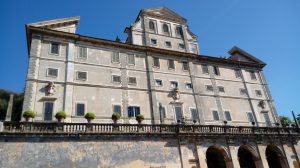 It is also known as Villa Belvedere, and is one of the most important historical villas of…