The church is opposite the Town Hall building and is the most important religious monument of the town, situated over an ancient Latin temple dedicated to the goddess Fortuna.

The church is open to the public during the mass

It was built at the beginning of the 15th century and consecrated in 1464 by Cardinal Bessarione. The façade, renewed in1932, still conserves the ancient stone portal, decorated at the base with the Savelli’s coat of arms.

The late-Romanesque style was altered by further interventions, which eventually deprived the church of its ancient splendour. Inside there are three naves, supported by octagonal stone pillars and crowned bycapitals decorated withacanthus leaf motif belonging to the original church. The 20th century apse is decorated with a fresco by Father Ugolino Da Belluno in 1972.

The church is open to the public during the mass 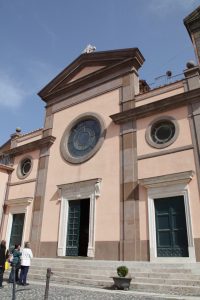