Museum of the Roman Ships

It was designed free of charge by architect Vittorio Ballio Morpurgo in the 30s, to shelter the two hulls of Emperor Galigula's large vessels, which had been recovered between 1929 and 1932 from the bottom of Lake Nemi.

The museum opened in 1940, is a rare example of a purposely-built exhibition centre designed as a sort of hanger with double aisles, large enough to hold the two ships, each measuring around 70 metres.

During the period of Caligula the two ships were used for lavish ceremonies in honour of the Egyptian goddess Isis and the Latin goddess Diana. They had already been discovered at the bottom of the Lake in the Middle Ages and in the 16th century were studied by archaeologists who were interested in recovering them. It was not until 1932 that the ships were entirely brought to light thanks to a daring project to lower the water level by about ten meters using the lake’s emissary canal.

Following a fire in 1944, probably caused by the retreating German troops, the museum and the important archaeological contents were all destroyed.

The exhibition hall reopened to the public only in 1953 and at a later stage, after appropriate restoration work, was eventually reorganized in 2001.

The actual museum is divided into two sections. In the one dedicated to the ships there are miniature models of the vessels, on-board equipment, naval carpentry findings, pottery, some of the ships’ decorative pieces and votive items. In the section regarding the territory, you can see findings from the local and Albano area dating back to the protohistoric period, the Bronze Age as well as evidence of Roman Republican and Imperial Age. It is also interesting to notice the stretch of the Via Sacra (the Sacred Way that from the Appian Way, in the direction of Genzano, leads to the Sanctuary of Diana Nemorensis) rebuilt with the original stone paving. 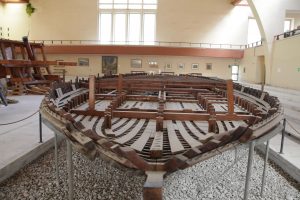 Museum of the Roman Ships

It was designed free of charge by architect Vittorio Ballio Morpurgo in the 30s, to shelter…