The ruins of ancient Tusculum are located on top of a hill that comes under four different municipalities (Grottaferrata, Frascati, Monteporzio Catone and Montecompatri) and from where you can enjoy a stunning view towards the sea. It is here that the "Parco Archeologico Culturale di Tuscolo" (Archeological-Cultural Park of Tusculum) is in the process of being organized.

Excavations started in the early 19th century and were carried out in various stages up to more recent times, during which remains from Roman times and the Middle Ages were discovered. In fact, Tusculum was a Latin, Roman and Medieval town, which was razed to the ground in 1191 by the Roman army as punishment for having given refuge to the militants of Frederick Barbarossa. Findings in the archaeological site date back to the Iron Age and indicate that human settlements already existed at that time.

In Roman times, an acropolis once stood on top of the hill, which is now indicated by an iron crucifix.

Slightly further down the hill you come across the Forum (1st century) with a Roman theatre, which is the best preserved structure of the whole complex. Outside the city’s ancient walls (still visible today at certain points up to a height of 2 meters), is the Roman Amphitheatre (2nd century). It can hardly be seen through the dense vegetation because excavations have never been fully completed.

The so-called road “Via dei Sepolcri”, of which the paving is still visible in some parts, used to connect the living area to the amphitheatre.

On a crag halfway down the hill, you find abandoned ruins of a medieval district where a Christian Church has recently been discovered. 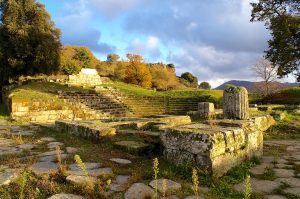