Abbey of St Nilus and its Museum

The Abbazia di San Nilo, also known by the name of Santa Maria di Grottaferrata, consecrated in 1024 by Pope John XIX, was founded in the year 1004 by Abbott Nilus, born in Calabria from Greek-byzantine origins. The Monastery was built on the ruins of a Roman villa, donated together with the surrounding land by the Counts of Tusculum.

St. Nilus did not live to see the abbey built as he deceased during the first year of the construction work, which was then taken over and completed by his successor and co-founder Bartholomew.

The exterior of the abbey was surrounded by solid merloned defence walls provided with a chemin de ronde and a semicircle fortress tower. In 1482, Cardinal Giuliano della Rovere decided to build the tower in order to control and defend the place of worship. The plan of the so-called Roverian Castle was most likely assigned to the architects Antonio da Sangallo and Baccio Pontelli but the work was interrupted when Giuliano della Rovere was appointed Pope with the name of Julius II, in 1503. The main entrance, which once featured a drawbridge, is decorated with bas relief carvings and is still visible today.

The actual bridge leads to the courtyard where you can see the large statue of St. Nilus and the portico designed by Sangallo.

The Chiesa di Santa Maria di Grottaferrata (Church of St. Mary of Grottaferrata), which is open to the public, is flanked by a Romanesque style bell-tower and features a façade decorated with a huge rose window. Entering by the “speciosa” door, so-called for its rich motif decorations, you reach the inside of the Basilica.

The original Romanesque interior decorations were overlaid in 1754 by heavy Baroque-style stucco cladding. The wooden ceiling dates back to 1577 and the polychrome marble floor ties with the 13th century style, while the triumphal arch dividing the central nave from the presbytery, is decorated with 12th century mosaic depicting scenes of the Pentecost.

The side aisle contains the so-called Grotta Ferrata (cryptaferrata) and the Farnese Chapel with its frescoes by Domenichino. At the entrance of the apse is the eye-catching icon of Maria col Bambino (Mary and Child) by Gian Lorenzo Bernini while further back is the sanctuary with a canopy and hanging silver dove that safeguards the Holy Sacrament.

Inside the Abbey, there is an important Library containing more than a thousand ancient manuscripts and around 50.000 volumes of great value. Some of them date back to the foundation of the Abbey and personally belonged to St. Nilus.

In addition to the library, the Abbey features the famous Laboratorio di Restauro del Libro Antico (Workshop for the conservation of ancient books) and among its most important works is the conservation of the “Antlatic Codex” by Leonardo da Vinci. The workshop was essential to preserve those manuscripts rescued from the flood in Florence in 1966.

Lastly, the Abbey is home to the Museo Archeologico (Archaeological Museum), which displays a rich collection of findings. The core of the collection started in 1875 with items the Basilian monks had gathered throughout the centuries. Other archaeological findings from nearby villas, catacombs, or donated by patrons of the Abbey, were added to the assortment. The collection boasts a well-known ancient stele (a seated, deceased youth dated from the 5th-6th century BC) as well as various marble fragments, sarcophaguses, coins, pottery and portraits (among which one of Alexander the Great and one of Constantine I). The artistic and historical collection includes Islamic and Sicilian pottery, artifacts, vestments such as the Omophorion (bishop’s pallium in silk and gold dated 14th century) as well as frescoes from the nearby medieval church. 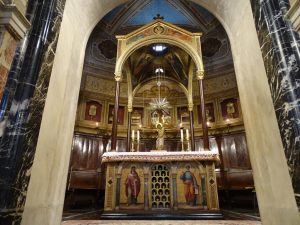 Abbey of St Nilus and its Museum