This large archaeological complex is a vast quadrangular clearing, decorated with tuff stone fountain and outlined by a wall from the Renaissance period.

It can be seen along the road joining Monteporzio Catone to Frascati and is traditionally understood to be the huge basement of a Roman villa, yet it has a complex structure, which is still being investigated.In Roman times, it was probably property of Agrippina, Nero and Domitian.Over 180 rooms supported by lower-arched barrel vaults, developing around two long parallel corridors of the Roman Period, occupy the western side of the clearing.The actual appearance of the structure started in 1567 when it was used as a hunting reserve and an Italian style garden. It was property of the Altemps, followed by the Borghese who incorporated it in Burghesianum. In the 17th century, it was a hunting reserve and the name Barca actually indicates an enclosure for hunted wild animals.Up to 2005, the archaeological site was not accessible but today, thanks to the restoration work, it is possible to follow the breath taking underground itinerary where you can see Roman epigraphic inscriptions outlined with brushstrokes and realized in charcoal or engraved on the wall plaster, as well as admiring ancient structures and building elements perfectly intact.Free entrance to the site but guided tours must be booked in advance. 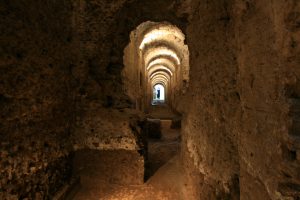 This large archaeological complex is a vast quadrangular clearing, decorated with tuff…