The Sanctuary of the Crucifix

The Sanctuary of the Crucifix, formerly the Church of Santa Maria di Versacarro, was built in 1637, together with the annexed convent by Mario Frangipane, to house the Franciscans of the Order of Observant Friars, after the Capuchin Franciscans had left Nemi to move to in their convent in Genzano.

The church is open to the public and can be visited.

The Sanctuary was originally the chapel of the Convent, and was dedicated to the Virgin because the icon of the Madonna of Versacarro was brought there. In 1669 the Crucifix was exposed, a wooden work by Fra Vincenzo da Bassiano found miraculously accomplished: from that moment the place of worship was called the Sanctuary of the Crucifix. Legend has it that the friar despaired of being able to carve the face of the Savior worthily, so he prayed and went to sleep; the next morning he found his face already sculpted, and admirably, for which he cried to the miracle. Looking at the magnificent wooden sculpture, we note the details of the features of the face, capable of giving vivid and profound expressions. In addition to the Crucifix, the icon of the Madonna, also known as the Versacarro icon, is highly revered in the Sanctuary; this name derives from a pious popular legend according to which, while some thieves stole the image by hiding it in an ox cart, the animals would have the wagon turned by divine intervention (in Latin, voltare is called vertere, hence the participle versus) and thus brought back the Madonna to the church. Originally the icon was a triptych, of which today only the central panel remains, which represents the Madonna and Child; the two side ones, with the saints Peter and Paul, were stolen in August 1975. Even the icon visible today was stolen in 2002, and then found in 2006 in Messina by the Police.

The church is open to the public and can be visited. 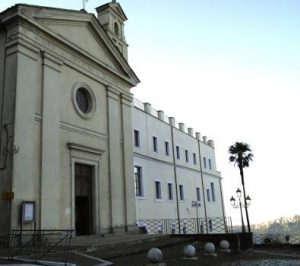 The Sanctuary of the Crucifix

The Sanctuary of the Crucifix, formerly the Church of Santa Maria di Versacarro, was built…